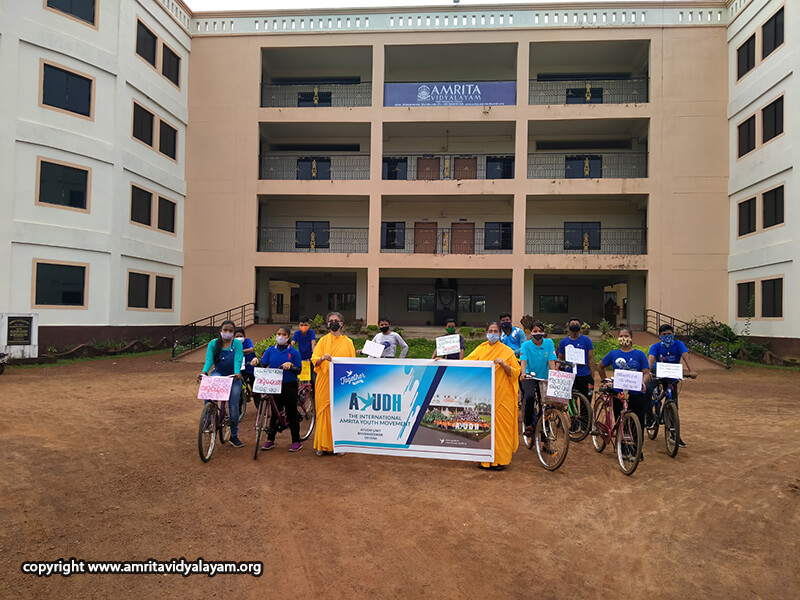 A bicycle rally to spread awareness about AMR was organized by the AYUDH Bhubaneswar chapter in connection with World Antimicrobial Awareness Week (WAAW).  WAAW is celebrated from November 18th to 24th every year, as declared by the World Health Organization (WHO). The theme of WAAW 2021 was “Spread Awareness, Stop Resistance”.

The team cycled from Kalinga Vihar to Shiva temple, and from Janla Chhak to Radha Madhav Math, Janla. Ayudhians gave awareness to the shopkeepers and customers there, and many of them promised that they would consult a doctor instead of taking any medicines on their own.

All the AYUDHians said that they themselves were not aware of this threat. Therefore, when they came to know about it before the rally, they first talked about it to their friends, family members, and relatives.

“It was a wonderful initiative by the AYUDH Team. They interacted with the local people and informed them regarding the harmful effects of taking excessive antibiotics. It was a wonderful experience for me. I am happy that I could take part in this event along with the Ayudhians”, said Santhosh, a teacher from Amrita Vidyalayam who actively participated in the rally along with Ayudhians. After the rally, the AYUDH team Bhubaneswar decided to spread more awareness about this issue among students of nearby schools.

All the AYUDH chapters across the world joined the School of Biotechnology, Amrita University in the worldwide campaign, ‘Go Blue for AMR’, to spread awareness about the threat of Antimicrobial Resistance.

AYUDH, or Awaken Youth, Unite for Dharma is the International Amrita Youth Association aiming to use the powerful force of young people to perpetuate natural harmony, social justice, and personal empowerment. AYUDH chapters in all states across India and in other countries including America and Europe organized bicycle rallies on the same day and are conducting awareness campaigns.